Based in Vienna, Austria

I was born in Waidhofen/Ybbs, Austria, on August 12, 1986 where I attended the Primary School, Sports High School and Federal Higher Technical Institute for Education and Experimentation (HTL) with a major in Automation Engineering. I graduated from the Vienna University of Economics and Business in December 2015 as Master of Science in Information Systems with a specialization in Information Systems Engineering. My master thesis was written in cooperation with AK Wien about the topic "Privacy by Design" and focused on the introduction of a privacy framework to fully include privacy in every aspect of the Software Development Life-Cycle. The build up to the master thesis was a cooperation with the famous Austrian privacy activist Max Schrems which resulted in a Privacy Awareness App that was covered in Austrian (ORF , Der Standard) and International (Computer Bild, Chip) media outlets and was awarded with a Best Student(s) Award in 2013/2014. In parallel I also completed the master’s degree in Theatre-, Film-, and Media Studies at the University of Vienna with high honors in 2015. In my master thesis I evaluated and discussed mobile design principles and developed a responsive mobile data visualization framework in cooperation with Weblyzard.

In 2005 I started the film website Filmering.at which became one of the most frequented film related sites in Austria. During my bachelor studies in Business Informatics I had the opportunity to start working for the Institute for Information Business at the Vienna University of Economics and Business as a Software Engineer, Web Developer and Researcher. I have been part of the research projects DIVINE, uComp, Decarbonet, CommuniData and ReTV and was the leading frontend developer on our side in a cooperation with NOAA and the White House during the realization of the Climate Resilience Toolkit, which was presented by U.S. Vice President Joe Biden in 2014 and was nominated for a Webby ("Internet’s highest honor" - New York Times) in 2015. In 2013 I also started to work for consol.Media, which was the biggest video game magazine company in Austria. I was the Web Development Leader of the company until the business was closed. During that time I completed web projects for partners like Microsoft, Nintendo and Ubisoft. In 2015 I joined the private university Modul University Vienna as a Software Engineer, Web Developer and Researcher. Besides my work as a Researcher, I was also responsible for a refreshment and make-over of the university website.

In 2016 I founded the company Martina Fotografiert together with my wife and since then I am responsible for the IT infrastructure and also working as a photographer. In 2017 I rejoined Weblyzard as a Software Engineer and Web Developer and the Vienna University of Economics and Business as a Researcher to work on my doctoral studies - with a research focus on Recommender Systems. I am also working as a freelance Software Engineer and Web Developer, focused on full stack PHP development and mobile applications (iOS and Android).

If you are interested in hiring me as a Freelancer, please contact me at any time at michael.foels@gmail.com. I am an accomplished full stack PHP developer, with a special focus on web design and web development, especially with the CMS frameworks Joomla, Drupal, Wordpress and Typo 3. I am also experienced in developing Android and iOS Apps with Java and Swift. I put a special emphasize on mobile and responsive design and I am obsessed with details. I can also help you with your SEO and Social Media activities.

Weblyzard
Software Engineer & Web Developer
My main focus is full stack web development in PHP and JavaScript, with a special focus on responsive design and performance optimization. I am the responsible frontend developer in cooperations with WKW and NOAA.
PHP
JavaScript
AWS
jQuery
Bootstrap
CSS
HTML
Responsive Design
Wordpress
Drupal
Linux
Freelancer
Software Engineer & Web Developer
Active in the area of full stack web development, from web design to the programming (mainly using PHP and JavaScript). I am also developing mobile applications for iOS/tvOS in Swift and Android in Java. I am specialized in frontend development with a special emphasize on mobile design (using mainly the concepts of responsive web design). Additionally I help clients with web hosting, backup solutions and performance optimization using AWS technologies. Furthermore, I am supporting customers in their long term IT integration and also with their SEO and Internet Marketing strategies.
PHP
JavaScript
jQuery
Bootstrap
CSS
HTML
Facebook API
Twitter API
Google API
Swift
Java
Responsive Design
AWS
Joomla
iOS
tvOS
Android
SEO
Internet Marketing
Social Media
Linux
martina.fotografiert
Photographer & Co-Owner
Together with my wife I founded Martina Fotografiert. I am responsible for the whole IT infrastructure, Accounting & Controling and I am also working as a photographer. I covered various events for business partners like Generali, EuroVienna, Green Finance and Abbott.

Vienna University of Economics and Business
Doctoral Program in Social and Economic Sciences
Currently I am attending the Doctoral Program in Social and Economic Sciences at the Vienna University of Economics and Business, specialized in Information Systems with a research focus on Recommender Systems. During my studies I attended the Internet Science Conference 2016 in Florence and the European Chapter of the Association for Computational Linguistics (EACL) 2017 in Valencia as a presenter.
Vienna University of Economics and Business
Master of Science in Information Systems
Specialization in Information Systems Engineering. Master Thesis about "Privacy by Design" in cooperation with AK Wien. Winner of the Best Student(s) Award in 2013/2014.
Universtity of Vienna
Master's Degree in Theatre-, Film- and Media-Studies
Focus on film studies and media design (with a special focus on mobile design). Graduation with high honors. Master Thesis about "Success Criteria of Web Intelligence Services on Mobile Devices".
Vienna University of Economics and Business
Bachelors Degree in Business, Economics, and Social Sciences
Major in Business Informatics. The bachelor thesis was about the challenges of translating services of the Learn@WU e-learning service to mobile devices. It was written in cooperation with the Learn@WU team.
HTL Waidhofen/Ybbs
Matriculation (Matura) in Automation Engineering
Sports High School Waidhofen/Ybbs
High School Diploma
Primary School Waidhofen/Ybbs
Primary School Diploma 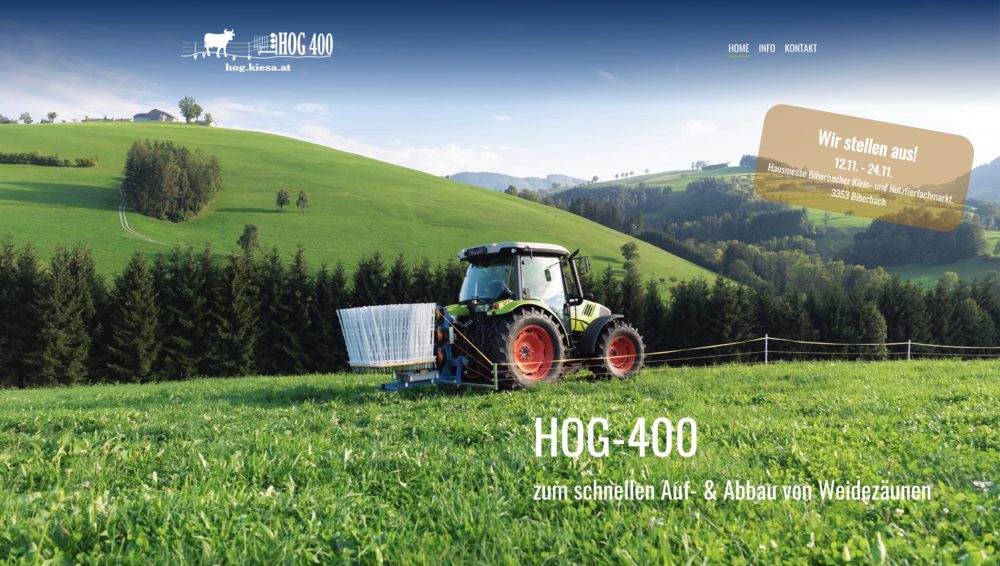 I developed the website and infrastructure for the gym Grexgym.com. The site is realized in the CMS Joomla. Besides of the frontend work, major backend and internal components were created. The first step was to create a sales app which connects an iPad point of sale with the billing system in the backend. Later the whole member area of the gym was created. The member area consists of an infrastructure for members and coaches to handle course registration, a personal feedback feed (with videos and images) and also the whole schedule management for the gym and the coaches, which is integrated with the billing system.
PHP
JavaScript
jQuery
Bootstrap
CSS
HTML
iOS
Responsive Design
Joomla
Linux
GamesweltTV
www.gameswelt.tv 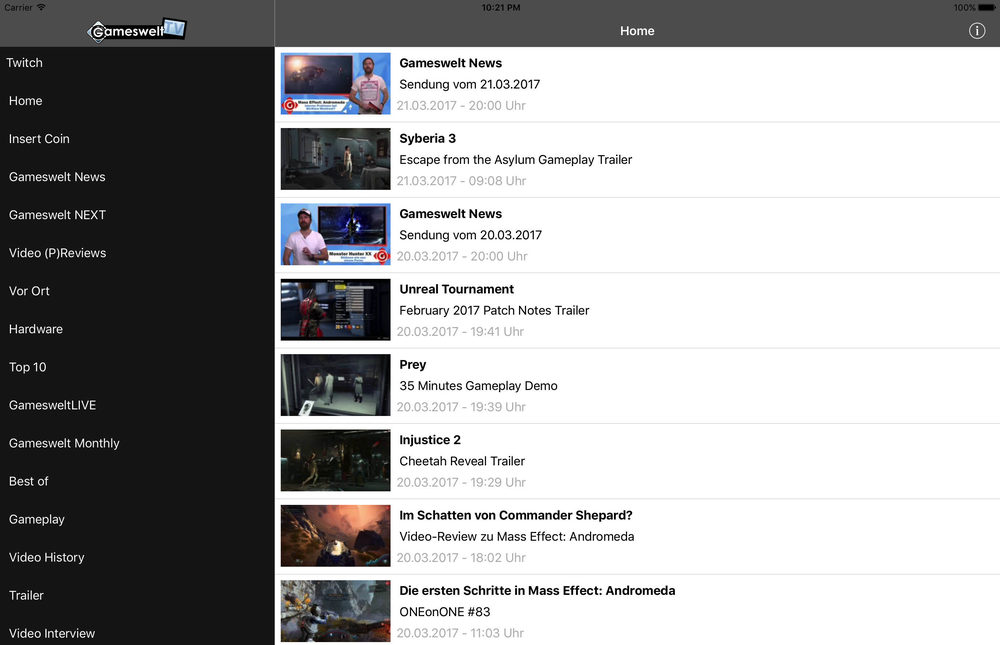 In 2015 I created an Android TV and Fire TV App for the german video game magazine GamesweltTV. Afterwards it was decided to port the App to regular Android phones and tablets. The App supports the Twitch API to show when Gameswelt is live on twitch and to directly play the Twitch stream. Furthermore, the Google IMA SDK (for Android and iOS) was used to supports pre-roll ads for the videos. In 2017 the Web Media Publishing AG contacted me to also develop an iOS and tvOS App with the same functionality. Following modern design principles and providing support for iOS features like multitasking, split-screen and Picture in Picture, the App was brought to iPhone, iPad and AppleTV in March 2017.
Android
Java
FireTV
iOS
tvOS
Swift
iPhone
iPad
AppleTV
Google IMA SDK
Martina.Fotografiert
www.martinafotografiert.at 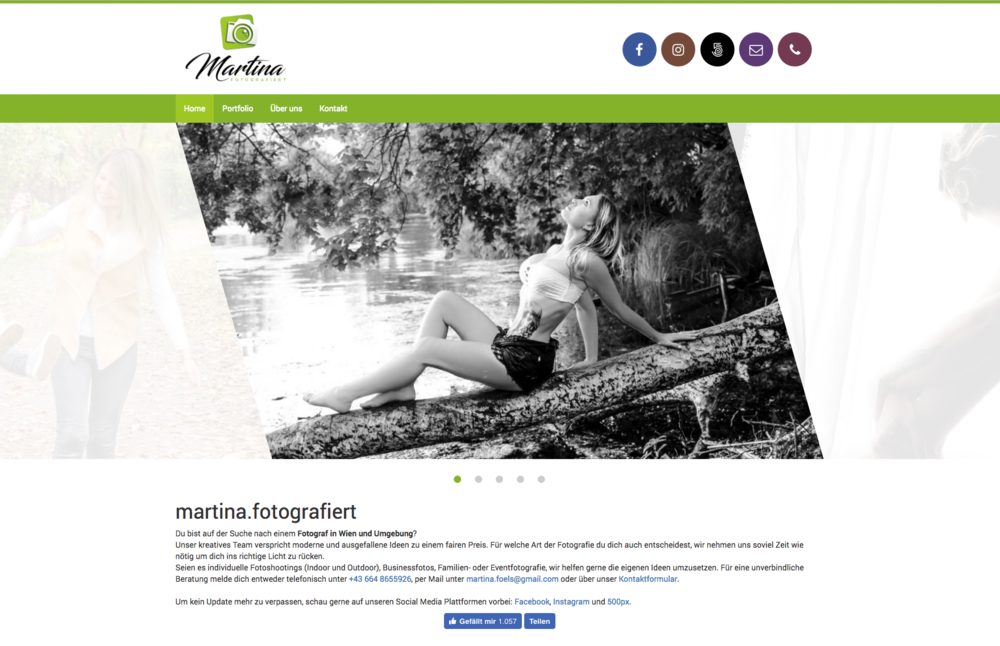 I am the founder of the project and was responsible for the whole technical infrastructure of the site for more than 10 years. Besides the programming efforts for various custom Joomla extensions, I also managed the freelance authors of the site and took care about the hosting, SEO and internet marketing by myself.
PHP
JavaScript
jQuery
Bootstrap
CSS
HTML
Facebook API
Twitter API
Google API
Python
Responsive Design
AWS
Joomla
Film Critic
Social Media
Internet Marketing
SEO
Linux
Shock2
mag.shock2.info

After the end of consol.Media the community was transferred to the newly launched property Shock2. I helped the founder Michael Furtenbach to set up the site and created a custom ad plugin for Wordpress. Furthermore, I provide technical help, troubleshooting and advise regarding the hosting of the site. I also appeared in one podcast as a film expert.
PHP
JavaScript
jQuery
CSS
HTML
Wordpress
Podcasting